In the Cue Educational Podcast Includes All Entertainers 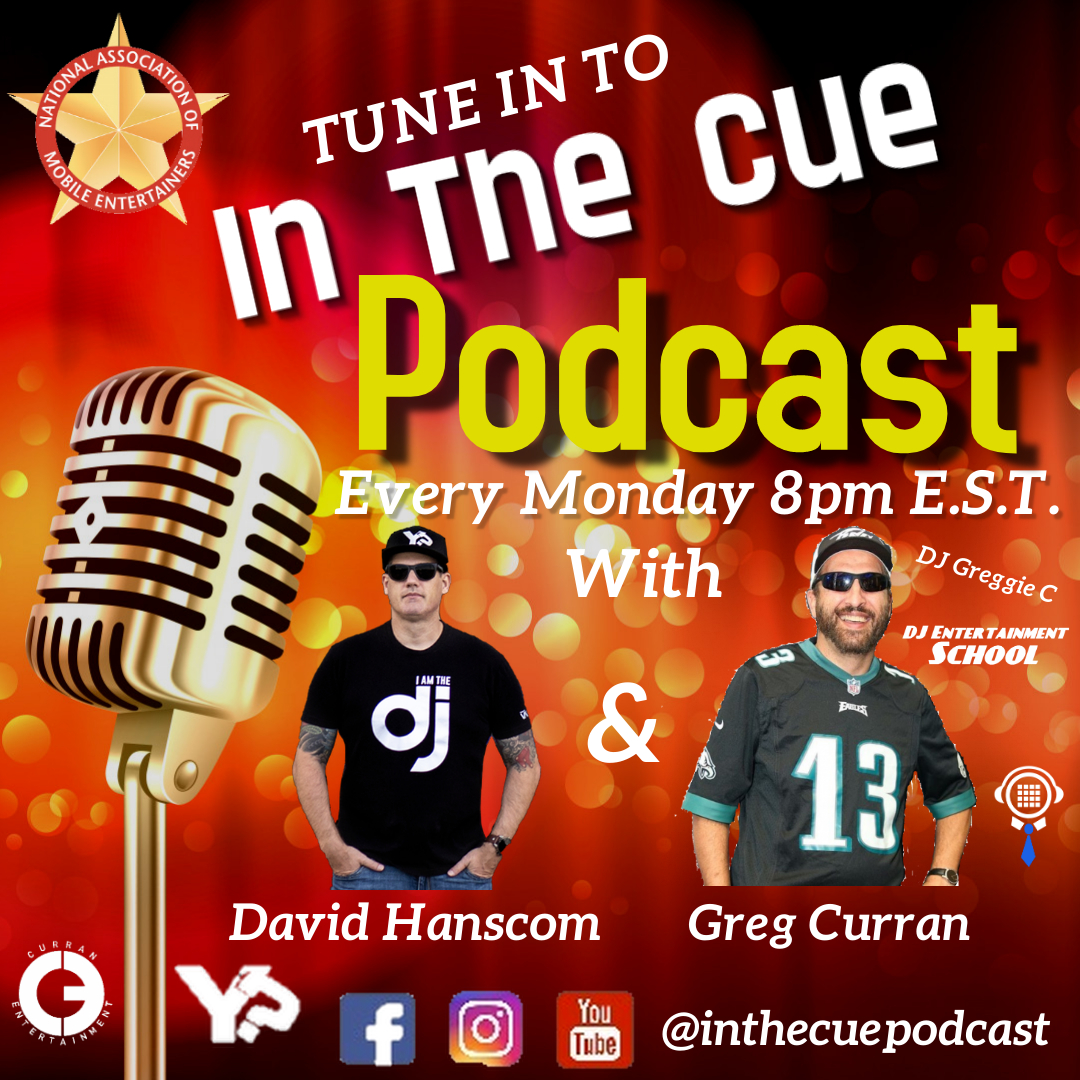 Greg Curran and David Hanscom, advisory board members of The National Association of Mobile Entertainers, started a podcast in the beginning of 2021 and have seen a huge following in a short amount of time. The podcast is streamed on Facebook live, YouTube live, Apple podcasts, Spotify podcasts and all streaming and podcast sites.

The show called “In The Cue” is a weekly event on Mondays at 8 p.m. EST with guest DJs, celebrities, product reviews, education, and so much more. Find the gang on social media to see who’s on next or visit the website at inthecuepodcast.com.

These two forces combined are an energetic and educational weekly event that will add value to any business owner or entertainer that wants to take their business to the next level.

To get a flavor of what the podcast tastes like, we’re featuring three of their best guests Keith Shocklee from Public Enemy, DJ Too Tuff from Tuff Crew, and DJ Sojo & DJ Dramadik from The Senate DJs as told by Greg Curran. Even though these are all DJs, In the Cue Podcast is open to hosting every entertainer!

Keith Shocklee from Public Enemy was one of our star guests last season. He discussed his past achievements and his future endeavors on Twitch. We featured him on the Name Entertainers blog previously as well.

Keith Shocklee, Keith Shocklee or Wizard K-Jee, is an American hip-hop producer and DJ. He was an original member of Public Enemy and The Bomb Squad. He has contributed his talent to several albums including “”It Takes A Nation Of Millions To Hold Us Back and “Fear of a Black Planet”. Shocklee also co-produced the singles “Bring the Noise” and “Fight The Power,” which were included on Rolling Stone’s list of the “500 Greatest Songs Of All Time.”

Shocklee began his career DJing at various parks, house parties and clubs in New York City during the early 1980s. He also cites Fatback Band’s “”King Tim III (Personality Jock)” as the pioneering rap song that triggered his interest in recording. The Bomb Squad’s first songs were produced in Shocklee’s mother’s basement and recorded on tape and acetate. He has since gone on to work with the following recording artists: LL Cool J, Ice Cube, Janet Jackson, Sinéad O’Connor and many other big-name acts. After Public Enemy’s first album was released, Keith helped create their production company, Bomb Squad, which produced Ice Cube’s first solo album and opened the door for many opportunities. In 2013, Keith was inducted into the Rock & Roll Hall of Fame as a member of Public Enemy Grammy Lifetime Achievement at The Smithsonian.

DJ Too Tuff from Tuff Crew

DJ Too Tuff from Tuff Crew was another great guest star. He also discussed his past with the band Tuff Crew and his future endeavors as well like Tuff Crews upcoming 2021 shows and the release of the lost archives. DJ Too Tuff, one of hip-hop’s most skilled DJs, ended up in a desperate world of hustling and crime… getting shot, pistol whipped and kidnapped, until a cancer diagnosis in prison provided an escape.

Philadelphia’s DJ Too Tuff impressed the hip-hop world with his lightning-fast scratches for Tuff Crew, most famously on their 1988 hit “My Part Of Town.” When the group found themselves broke and without a record deal, Too Tuff turned to hustling to survive, all the while attempting to rebuild his music career. What followed was a treacherous journey through the malicious underbelly of urban life. We will discuss with him tonight his rise to fame as a DJ and the Dark world of entertainment & what drugs can do to you. We also discussed on the show with Too Tuff the power of POSITIVITY and overcoming obstacles at any cost and staying true to the music, art, and your FAMILY!

Finally there was DJ Sojo & DJ Dramadik, the founders of The Senate DJs. Besides talking about the Senate DJs and how they strive to be professionals in all that they do, we also discussed how Senate DJs stand for respect for the art form, integrity, knowledge and community outreach that they do.

In the life of DJ/producer Anthony Sojo, a commitment to his dream, passion for greatness and fire to succeed has landed him in a world he has built over the last 18 years. Growing up with family in music, and hard working parents, Sojo developed a tenacious work ethic that carried him through many stages of his career.

At the age of 17, he began to train his ears on an old set of Technics 1200s. With his first attempt mashing up two hit records, the magic of music was unlocked. Starting off in a mobile DJ company called UltraSound, Sojo learned the art form of reading people right from the start.

“To me, technical ability aside, a DJ has to be able to tap into his sixth sense of reading his room. Playing to a crowd that owns your music is one thing. But the magic is walking into a room of people all different ages, ethnicities & social classes and making them dance to your set is where it happens! To me, it’s always been about the room first and I learned that in the mobile world. “

Despite the trouble he got in, this episode would ignite the fuel that has been driving DJ Dramadik for over 18 years as a professional Deejay. He would frequently travel from his native home in Atlantic City, NJ, to Brooklyn, New York to visit his mother. His experiences in Brooklyn would help expose him to the work of DJs like Red Alert, Jazzy Jeff, EPMD’s DJ Scratch, Jam Master Jay, and Kid Capri. David Michael would look to these legendary icons as major influences as he evolved and expanded in his career. From his work in both New Jersey and New York, David Michael has earned his moniker, “The Brooklyn-Jersey Express.”

So where is David Michael today? In short …everywhere… from the hottest night clubs to private celebrity parties, he does it all. Bringing the true art of Turntablism to the party Spinning from both his private remix vault as well as his massive hits collection that has been 15 years in the making.

Want to be featured on In the Cue Podcast?

Email david@yentertainmentdjs.com and djgreggiec@gmail.com to connect or schedule your spot on the calendar today! Current NAME Entertainer members only please.

Welcome to The National Association of Mobile Entertainers!